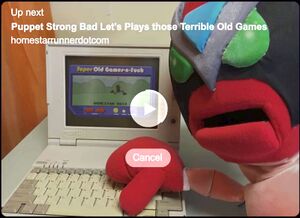 {A live-action case filled with 5 inch floppies sits on a desk next to an old computer. The disk in the front has a handwritten label reading "Disk 4 of 12". Strong Bad's gloves reach into the shot, open the case and begin rifling through the contents.}

STRONG BAD: {singing} When I check my email,

STRONG BAD: —there are some old games.

{Strong Bad inserts the disk into a disk drive and then types on a keyboard with boxing gloves on.}

STRONG BAD: Now I'm gonna play them for you.

{Gameplay footage of various vintage games begin to play. The first shows a man in a giant cotton candy machine. He gets struck by a wooden beam and his head swells and explodes.}

STRONG BAD: {voiceover} Hello there, what's—NO! Wow! That is not what I wanted to happen!

{The game switches to a wrestling game where grayscale sumo wrestlers lie on the floor of the ring sleeping.}

{Game now switches to a toilet inside a shower. The showerhead is running.}

STRONG BAD: {voiceover} Turn this on. Spaghetti noodles that are uncooked shootin' out of there.

{Game now switches to a two-color game. A man in a swimsuit is standing at the top of a purple cliff and dives off.}

{The game switches back to the first game, where the player confronts a giant bee.}

STRONG BAD: Do you want some cotton candy, bee? {The bee stings the player, causing the player's head to swell and then disappear entirely} Nope, you want to kill me still.

{The game is now a primitive dungeon crawler where the player is holding a sword. The player leaves a room into a hallway.}

STRONG BAD: {voiceover} This game is about collecting crosses, and turning vermin—

{The scene cuts to another room where the player strikes mice, turning them into white mushrooms.}

{The game is now a primitive Battleship game with three levels and a grid made of letters.}

STRONG BAD: {voiceover} Look at that battleship! That thing's amazing!

{The game switches to an athletic obstacle course game. The player is leaping over a row of barrels and takes a dive, causing one of the barrels to fly out from the row and break.}

{The game is now a black screen reading "What Is Your First Name Captain? (Enter Your Name And Then Strike The Enter Key)".

STRONG BAD: {voiceover} Enter your name and then STRIKE the enter key! Strike it down with extreme prejudice!

{The game now shows a screen where the player is looking into a series of bright lights as the silhouettes of doctors look down. A heart rate line blips.}

STRONG BAD: {voiceover, laughing} What? That is an orange slice that's shooting out some... oil... slicks.

{The screen now does a checkerboard wipe. The game now shows a face on a monitor reading "Mayor Vincenzi" and "Hunter, We've had more reports come in of kids dying..."}

STRONG BAD: {voiceover} There's like a real-life old man staring right at me!

{The text momentarily changes to "...all were horribly disfigured like my... (gulp) ...my poor daughter." before the game switches back to the dungeon crawler from before. The player walking into a river and transforms into a yellow skeleton.}

{The screen goes black, with the text reading "Y u Drowned!"}

STRONG BAD: {voiceover} Why you drowned? I dunno!

{Cut back to the computer monitor, now inactive. The title screen for Strong Bad's Disk 4 of 12 returns with a beep and a disk reading sound.}

STRONG BAD: Hello! Strong Bad here! And I’m going to play those terrible old games! First one! She Loves Me, that stupid love tester with Marzipan and Homestar! Okay, she loves me.

HOMESTAR: Aww, she woves me not!

STRONG BAD: Oh crap! Now, here's Dancing Bubs. That stupid dancing game where you control Bubs while dancing in his Concession Stand! Oh look, I got a high score! Next, Homestar Quiz. I want to get all questions wrong as possible.

EARLY STRONG BAD: Okay, that does it. You're the stupidest guy in the world.

STRONG BAD: WHAT?!? I GOT ONE QUESTION RIGHT? UGH! Homestar Talker. I wanna get to that Strong Bad Talker as soon as possible.

HOMESTAR: Pom-Pom and Stwong Bad are totally going out.

EARLY STRONG BAD: But Homestar can win the stupid competition.

STRONG BAD: My main page?! Can I go back? Oh! Audition with freaking Marzipan!

STRONG BAD: I deserve a taste of my own medicine? Three more egg.. I mean games left! {sarcastic} Bronco Trolleys! So Delicious! I got a high score again! Woo-hoo! Strong Libs! I love this game!

EARLY STRONG BAD: The other day I was at Blubb-O's eating fries when out of nowhere came this crappy guy. I could tell he had serious pants problems from the get-go. His ankle was all broken and stank like A. Chimendez. Moist chocolate were hanging out of his pants. He fell down in a puddle of pee. I laughed my pants off.

STRONG BAD: That story wasn’t very good. I could use this as a bedtime story for The Cheat when he sleeps with The Denzel tonight. Final one! Fortune cookies! I’m picking the one on the right! www.thoraxcorp.com? What is that crap? Let me go on it! Turns out Thorax is now Faceless Megacorp after they merged with that company. Anyways, I’m done playing these terrible old games that nobody cares about. Send me some new games and I will play them.

STRONG BAD: Question of the freaking day: What video game do you want me to play next? Remember to like this crappy video and subscribe. Also push that red mystery button.

STRONG BAD: Next one is Who Said What Now?

STRONG BAD: What the freakin' crap?

STRONG SAD: Once there was a boy named Thomas. Nobody at Larry Palaroncini Elementary School liked him. They hated him and bullied on him and called him dumpy. Once they even put tiny spiders in his underpants. He told the teachers but they just made fun of his butt. There was a girl named Tina that thought he was cute but she hated him. Thomas was very crappy that day. Then one day he got happy and everybody liked him. But then he found out they were kidding and really making fun out of him. He fought some more. He is still a idiot today.