Summary: When asked about the female equivalent of "the guy", Stinkoman tells a story about how he first met the most powerful girl in the universe.

Cast (in order of appearance): Stinkoman, 1-Up, Marzia, Pan Pan 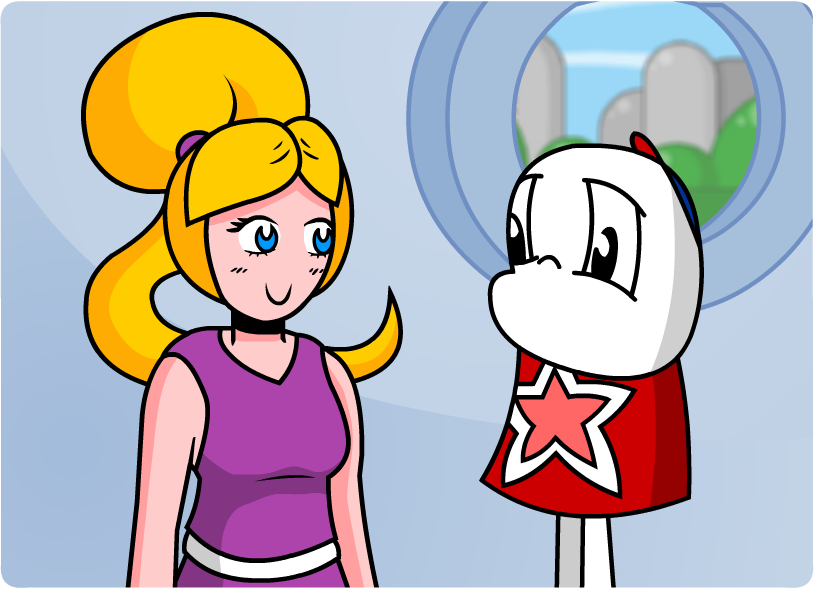 {The email opens up, as it often does, with a little email intro from Stinkoman.}

STINKOMAN: {singing} This is not the greatest email in the world, no. This is just a tribute.

Dear Stinkoman,
If you're the guy, can I be the girl?
I have plenty of experience in challenging and fighting.
- Chromera

STINKOMAN: {typing} While that may be true, Chromera. The fact of the matter is that you cannot be a "the girl". Before you start writing your angry tweets, let me clarify that we already have a "the girl".

STINKOMAN: I met her at last year's Strongest Man In The Universe Tournament strangely enough. She's a gorgeous magical girl with a staff that shoots lasers and has like this crazy extended transformation sequence that you have to sit through every single time before any combat actually begins. Like, I'm sorry, but why do magical girls do that? The bad guy can strike you down mid-transformation at any time. Do you think they're just going to be polite enough to sit around and wait for you to be done? But, tournament rules dictate that we have to wait for any transformation sequence, power-up sequence or call from their mother. Until that's done, the fight has to be put on hold. Trying to appeal the rule, but no luck so far.

{He clears the screen once more.}

STINKOMAN: So, where was I? Ah, yes. Just before the first round of the Strongest Man In The Universe Tournament 20X5. I was sitting in the locker room trying to get ready.

{As Stinkoman explains, it transitions to a flashback where Stinkoman is indeed sitting in a locker room, eyes closed and tapping his foot, breathing slowly, as if trying to focus on something specific. Suddenly, 1-Up jumps into the frame and breaks his concentration.}

1-UP: HEY, STINKOMAN! EVERYONE SAYS YOU'RE THE GUY! BUT, YOU'LL NEVER GUESS WHO I JUST MET!

STINKOMAN: WUH-WHAT are you doing in here? Can’t you see that I’m trying to get into the right head-space for... {mumble singing} ... challenge and fighting and fighting the challenge toniiiiiight. Everybody'sfightingforthechallengeofthefightingandthe—

1-UP: There’s someone I wanted to introduce you to. They’re my other-other cool best friend that’s entering the Super Mega Ultra Strongest Man In The Universe Tournament 20X5.

STINKOMAN: Well, can’t it wait until after I’ve done my breathing exercises?

STINKOMAN: I’m robot-ish! ISH! I can still breathe... I think.

{Stinkoman stops to ponder that for a moment.}

STINKOMAN: The point is that you’re not supposed to be in here, 1-Up! This is for contestants only!

1-UP: Avoiding the question! Ohohoho, Stinkoman. That is very on brand for you.

{Camera pans to the right to show Marzia-chan (or 20X6 Marzipan) wearing a false mustache, but not really doing anything else to alter her appearance. A paper-thin disguise.}

{Stereotypical male gaze camera pan across her body, and then it zooms in on Stinkoman all wide-eyed and heart-eyed, indicating that he has taken an interest in Marzia. Before he shakes his head quickly, snapping out of his trance.}

STINKOMAN: This is the men’s locker room... for the Strongest MAN In The Universe Tournament... {Pause.} 20X5.

1-UP: Bahahaha, I don’t see how that’s relevant at all. We’re all guys here. Isn’t that right, Marshall?

{Stinkoman blushes and awkwardly covers his exposed shiny, metallic chest... which is always exposed, so there’s no real reason to suddenly be embarrassed by it. One screen-wipe later and the scene transitions to Stinkoman, 1-Up and Marzia standing in the hall. Pan Pan bounces by from the right side of the screen.}

STINKOMAN: Ah, perfect! This should settle it once and for all. Pan Pan is one of the most observant out of everyone I know. Hey, Pan Pan! Great training sesh the other day, say... have you met my new pal... my new bro... my new amigo, Marshall, over here?

{Stinkoman gestures to Marzia-chan and Pan Pan just nods to her. There is a pause.}

STINKOMAN: Notice anything SPECIFIC about him.

STINKOMAN: NO! NOT like that he could BEAT ME THIS YEAR! I mean, like... he’s wearing a skirt. Doesn’t that clue you into anything?

STINKOMAN: Yes, I know it is “20X5” and that men can wear skirts. I’m not a skirtaphobe!

STINKOMAN: Uh, yeah. See you at the first round.

{Pan Pan bounces off, nodding once to the three of them before he does so. Marzia-chan and Stinkoman look off in random directions awkwardly.}

1-UP: Now that that’s settled. Come on, new best friend, Marshall! Let’s go write our names in the snow.

{Marzia looks EXTREMELY uncomfortable with what 1-Up just said as he starts walking off-screen to the right. It then cuts to 1-Up and Marshall’s names and simplistic drawings of them being written with a stick which 1-Up is holding.}

1-UP: Yeah, of course. What did you think I meant?

MARZIA: It doesn’t matter. Thanks 1-Up for treating me with such kindness as soon as I arrived in this city. You’re a strange one, granted. But with all the hectic, crazy things that go on, it’s just nice to have a friend, you know? Not someone always wanting to scrutinize you or... save you... or flirt with you.

MARZIA: So, you have a girlfriend then?

1-UP: What? Oh no. I just meant that I’m aware of girls. Like, I know they exist! Somewhere.

{There is an awkward pause, before Marzia-chan just bursts out laughing.}

MARZIA: I like you, 1-Up. Your optimistic and cheery outlook on life and general demeanor make me want to be a better person. I fear that I haven’t been completely honest with you though. I’m just scared that you’ll... treat me differently when you find out the truth.

1-UP: Oh, I already know that you get your superpowers due to an ancient magic staff and that you live in outer space fighting off against alien invaders which is why we’ve never seen or heard of you before now and that you’re entering the Strongest Man In The World Tournament to prove to your evil galactic emperor father that you’re nothing like him.

MARZIA: How could you possibly know about all of that?

1-UP: Context clues. You’re always staring off into space, so I figured... space... space is related to computer memory... which you can store on a USB stick... sticks can also be wands... wands can do magic... magic is how I feel when I’m with you— which means you have Star Wars-esque tragic backstory which both makes you cooler than Stinkoman and also less likely to... stick around than Stinkoman.

MARZIA: I like your goofiness, 1-Up. Please. Never change.

{It cuts back to the present where 1-Up is standing to the side of Stinkoman who is seated on his hovering chair next to his holographic floating computer screen.}

1-UP: And I never diiiiiiid!

STINKOMAN: Well, something about you has got to change if you want to get into the Strongest Man In The Universe Tournament this year. Training sessions start soon and this ain’t no Wii Sports casual gaming sesh. You’re going to work harder, faster, better, stronger than you ever have before! Are you ready, 1-Up?

{Cut to Marzia-chan standing the hallway of Stinkoman Headquarters, no longer with the false mustache. Just her usual self.}

1-UP: {walks on-screen} You can have more than a second. What’s up?

MARZIA: I just want to thank you for being there for me during some of the tougher moments of my life this past year. I’ve been able to keep up my double identity as a superhero and have a normal life with you, Stinkoman and Pan Pan on the side. I didn’t think I’d be accepted into the challenge-er and fighter-er-er boy’s club since I’m... y’know... a girl.

{1-Up closes his eyes and takes a deep breath.}

Retrieved from "https://hrfwiki2.miraheze.org/w/index.php?title=Stinkoman_Email/5&oldid=11559"
Cookies help us deliver our services. By using our services, you agree to our use of cookies.