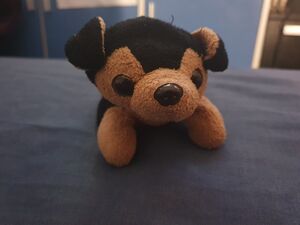 Jack is a young black and brown Jack Russell Terrier puppy, and is one of Charlie's companions, along with Lollipop and Dudley. He and Lollipop came to Free Country a few days after Charlie arrived, just because they were missing him. Jack immediately became popular with the residents of Free Country due to being so cute, and soon became a mascot for Bubs' Concession Stand. While he is insanely cute, he's not too bright, and can often do things similar to that of Homestar. Jack is normally taken care of by Lollipop if Charlie is busy, and Lollipop cares for Jack very much. Jack can be easily scared, and can often run off if startled. Strong Sad in particular is very fond of Jack, once taking care of him while Charlie, Lollipop and Strong Bad were having an argument. As mentioned earlier, Jack is the mascot of Bubs' Concession Stand, with Charlie working on making some products featuring Jack to increase sales for Bubs. Strong Mad is also very fond is Jack.

Retrieved from "https://hrfwiki2.miraheze.org/w/index.php?title=Jack_(OC)&oldid=13236"
Category:
Cookies help us deliver our services. By using our services, you agree to our use of cookies.