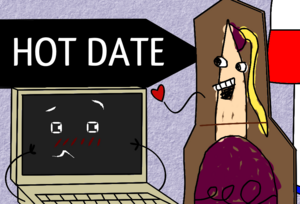 Summary: The recommended characters audition to be added to the show.

{Scotty Titi stares very hard at the other contestants}

THE PAPER: {printing out} > Wipe that smirk off your nonexistant face!

ONION BUBS: Humidibot's the one who messed it up for us.

HUMIDIBOT: I'm not here to argue, though! I prefer to get along 'cuz I'm Humidibot!

DOREAUXGARD: And look how it works out for your team.

HUMIDIBOT: Maybe I did take an issue with how my teammates changed my movie... This never woulda happened if Tony Stony was here.

THE PAPER: > just try and be a part of the team next time.

{The Lappier hops into view}

LAPPIER: Okay, objects, time for one of you to go to the Goodwill reject pile. Figuratively, of course.

ONION BUBS: Get on with it.

LAPPIER: The winners get a big slice of this cardboard box covered in syrup.

F-SACK: {pokes his head in} From "monster truck"!

{He looks over the members of The Onion Bubses}

LAPPIER: Scotty Titi, you were the only one not arguing. You are safe.

{The slice of cardboard box passes through him}

LAPPIER: And now... The Paper, although you suggested the changes that ruined the film, you are also safe with no votes.

THE PAPER: > Coulda worked if everyone was on board!

LAPPIER: Now down to the two that had the argument. One of you's gonna officially win the argument right now.

{The two watch with anticipation}

LAPPIER: Onion Bubs, I have a message for you...

LAPPIER: {singing} Despite your popularity, you got {spoken} ...eliminated.

LAPPIER: Dude, it was three votes. There's nothing to recount.

{Meanwhile, Humidibot gobbles down his slice of cardboard box}

HUMIDIBOT: {spitting out} Ech! This is butter syrup, not real maple!

LAPPIER: For his penalty game, Onion Bubs gets to spend the day in King of Town's castle... on Thanksgiving.

ONION BUBS: It's the middle of summer.

LAPPIER: Yeh, the King of Town has multiple Thanksgivings every month. Upsy daisy!

THE PAPER: > if Onion's gone then are we called The Papers now?

LAPPIER: I'm not calling you that. Anyway, you objects get to go on break this episode, because it's time for a recommended character to join!

FRANK BENNEDETTO: {salutes} Roger. We shall take shore leave then.

{The Lappier goes that way. Cut to the stage, where the Lappier is in front of the curtain}

LAPPIER: We only had one recommendation. So I'm adding a bunch more, so the audience gets a choice. Each one will audition, and then our three voters will choose. Perhaps four if we're lucky.

{He hops to the end of the stage}

LAPPIER: Bring in the first one.

{The first object comes in - Marzipan's guitar Carol. She has a Marzipan-like smile and little arms and legs}

CAROL: Oh hey, everyone. I am called Carol, I am the only girl object, and I hope to make a good impression here. My hobbies are tinkering with my strings and being fiercely independent, and my favorite food is Kickin' Habanero buffalo wings. {whispers} Don't tell Marzipan that last one.

{Carol plays her strings in a familiar tune}

LAPPIER: What is that song? Hmm... {humming} Hmm hm hm, got me lifted, shifted, higher than the ceiling, sugar how'd you get so fly? {speaking} I haven't heard that song since forever. I don't think anyone expected you to make a reference like that.

LAPPIER: How about the next object, please.

LAPPIER: You may be related but only one gets the opportunity to be on the show.

ANIMATRONIC SB: It's gonna be me!

LAPPIER: I'm afraid to ask what your talent is.

GRAPE-NUTS ROBOT: Now spell: You have a butt.

ANIMATRONIC SB: This guy doesn't have any talents.

LAPPIER: I think we'll move on.

{The next object is the Jibblies Painting}

LAPPIER: Well well, the creepy one himself.

JIBBLIES PAINTING: I already have a presence online, but it couldn't hurt to promote my brand.

JIBBLIES PAINTING: And I have a pretty neat talent too.

{Animatronic Strong Bad comes in lugging Mrs. Bennedetto, a microwave, and sets her down}

LAPPIER: So, why not introduce yourself?

LAPPIER: Let's skip to the talent.

STOOLY: Strong Bad hasn't had his be-panted hinders on me in some time.

LAPPIER: So your condition has been improved to mere "stink".

STOOLY: Well, I have the amazing power to prevent Strong Bad from checking email by not being in front of his computer.

LAPPIER: Like you said, he hasn't checked em in a while. That's why I had to get this second job as a host.

{He scoots along the floor and makes a noise}

{Cardboard Marzipan walks in... still just a cardboard cutout with Homestar Runner hiding behind it}

CARDBOARD MARZIPAN: Okay, first of all, I heard what Carol said and if I catch her with buffalo wings, I'm trading her in for a tambourine.

LAPPIER: How you doin' tonite?

CARDBOARD MARZIPAN: Hey, you wanna go on a hot date, behind Homestar's back? I'm sure he wouldn't mind, but I don't really care if he minds anyway.

CARDBOARD MARZIPAN: Super nagging that can melt a man's brain! And I'm not afraid to use it neither.

LAPPIER: We'll just take your word for it.

LAPPIER: The last recommended character is...

{He jumps in the middle of the stage}

LAPPIER: ...ME! I can be a contestant! I'm smart and charismatic and I could hold a team together. You already know me well from the previous episodes. Of course, someone else would get to be host in my stead.

{He bows with his laptop lid}

LAPPIER: So those are the choices. This time, you vote for who you want to join the game. Carol, Grape-Nuts, Animatronic Strong Bad, Jibblies Painting, Mrs. Bennedetto, Stooly, Cardboard Marzipan, or the Lappier. Those are your options. Leave your opinions in the designated place.

{Onion Bubs is seen in the King of Town's pantry}

KING OF TOWN: {overheard} I need more turduckens! Stuff a bunch of them inside a pig roast and then stuff that inside a beef cow!

ONION BUBS: {looking around} This is a bad place to be.

ONION BUBS: {whispers} Hey, that can can hide me.

{He sniffs the air vent and looks inside. However, all he sees are the 1983 Aww Gratin Potatoes}

{He climbs back down}

Retrieved from "https://hrfwiki2.miraheze.org/w/index.php?title=Inanimate_Objects_in_Decidedly_Non-Inanimate_Situations/Episode_4&oldid=11776"
Cookies help us deliver our services. By using our services, you agree to our use of cookies.