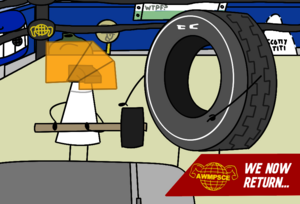 {After a swoosh-in of the AWMPSCE logo, the match returns where it left off. Humidibot is in the ring with Stop Sign}

STRONG SAD: We now return to the match, already in progress. As you can see, Stop Sign has tagged in during the commercial break.

COACH Z: Humidibrat is in a real pinch!

{Stop Sign runs up to Humidibot and clotheslines him, After he gets up in a daze, he gets clotheslined again}

STRONG SAD: So how does our humidifying friend get out of this one?

COACH Z: Run a power play with a guard kick-out?

{Stop Sign lifts Humidibot to his wheels in preparation for more punishment. But since he is close to the IODNIS corner, Lappier is able to grab his leg through the ropes}

{Stop Sign kicks his leg out and knocks Lappier clear off the apron, into the crowd of lumberjacks}

STRONG SAD: Lappier's little distraction not paying off for him...

{As soon as Stop Sign, turns around, Humidibot slams into him, sandwiching him in the corner. He then irish whips the stop sign into the ropes}

STRONG SAD: ...Or maybe not! Humidibot's got second wind!

{Humidibot rolls back and bounces off the ropes. The competitors are slingshotted into each other at full speed... resulting in them knocking each other out}

COACH Z: Meetin' of the minds!

{The two objects are dazed on the floor. The Umpire looks back and forth between them, then starts counting}

STRONG SAD: This could end in a KO finish if one of these objects is knocked out for a count of ten!

{The Umpire counts 2. Humidibot stirs to life and starts dragging himself back to his corner}

COACH Z: Push it to the limit, kid!

{Humidibot gets ever closer to his corner. Frank Bennedetto lifts his hand up, as if he was tagging himself in, and then... hesitates, suddenly looking nervous}

{A few more seconds pass. Just when Frank was finally about to tag himself in, Stop Sign drags Humidibot away from the corner}

STRONG SAD: Something must be going through his head to put him on tilt.

{Humidibot is dragged to the On Point Objects corner. Stop Sign tags in Tire, and they immediately start double teaming on Humidibot yet again}

STRONG SAD: You hate to see it. Humidibot lost his best chance to get out of the ring and now he's getting pummeled again.

{The Umpire hassles Stop Sign until he reluctantly climbs back on the apron. Tire continues the attack. dropping an elbow drop on Humidibot}

STRONG SAD: Our referee, taking control again. No disqualification doesn't mean everybody can be in the ring at the same time.

{After a few more stomps to the fallen bot, Tire suddenly charges the IODNIS corner and clotheslines Lappier and Cardboard Marzipan off the ring apron}

COACH Z: Cheap shot to the tag pratners on the apron! But wait... he didn't attack Frank.

{Tire rises his arms to hype the crowd up. He then calls out a command to one of the lumberjacks outside the ring}

{The camera zooms on the lumberjack in question - General Tso's Chicken. He reaches under the ring and pulls out a sledgehammer, which he slides into the ring}

STRONG SAD: Shocking swerve! The On Point Objects have an unexpected fifth member!

{Tire takes the sledgehammer. But instead of using it on Humidibot, he waves Frank Bennedetto into the ring}

{Frank actually comes into the ring. Tire holds the sledgehammer out for him to take, and... he takes it}

STRONG SAD: Uh oh. I don't like the look of this.

{Tire stares at Frank and points down at Humidibot}

STRONG SAD: Frank would never... would he?

{Frank grips the sledgehammer tight and lifts it up high}

COACH Z: Whoar! I think he is!

{Frank swings it down}

{Frank suddenly swerves his aim at the last moment, and clobbers Tire with it}

{The other On Point Objects swarm the ring after him. Frank knocks them silly one after the other, protecting Humidibot}

STRONG SAD: Ohh! All the-opposite-of-heaven is breaking loose here! The referee can't get it under control!

{The On Points keep rushing at Frank and he keeps knocking them down. As soon as he has a moment, he climbs behind the ropes, tags Humidibot and climbs back in again}

STRONG SAD: Well, now he's the legal man... there's objects all over the ring, Tire is down, Humidibot is down!

COACH Z: And Frank is at the 40 yard line, ready to rush the end zone!

{Tire gets to his feet, but Frank immediately hauls him up above his head and does weightlifts with him}

{Frank Bennedetto salutes the crowd. He pounces onto Tire and pulls him by the radial into a submission hold}

STRONG SAD: How would you know?

{Frank continues to pull at Tire. The Umpire crouches down next to them, watching to see if he submits}

STRONG SAD: If he taps out, this main event is over!

{But after a few seconds, General Tso's Chicken yanks at Frank's leg from outside the ring and pulls him out of the hold}

COACH Z: Tire getting a bit of unsportsmanlike assistance dere.

{Then another lumberjack, Drive-Thru Whale, opens wide and chomps down on General Tso's Chicken, causing him to flail his little legs in protest}

STRONG SAD: But it's the IODNIS runner-up with the save!

{Frank Bennedetto and Tire both stagger to their feet, and lock up once again}

{Tire whips his opponent into the corner. The Umpire happened to be in the way, they collide and... he gets knocked out cold}

STRONG SAD: Now the referee is down!

COACH Z: Hey, how could a big hoss like the Umpire get knocked cold by a lil' popcorn popper?

STRONG SAD: It's wrestling. Wrestling referees are always made of wet tissue paper.

{The other On Point Objects notice the chaos going on and climb back into the ring. The group of four all gang up on Frank Bennedetto, stomping him down}

COACH Z: It's gettin' ta be a real macassar now!

{The Strong Badia team continue to kick Frank back and forth. While they were occupied, they failed to notice Lappier getting upright and climbing into the ring}

{Lappier hops up to Stop Sign and taps him on the shoulder. As soon as he turns around, Lappier punches him in the gut, leaps up and gives him a stone cold stunner. Lappier's monitor lights up, reading "DELETED"}

{Lappier then does the same move on the other three objects, catching them off guard with a punch and giving them a stunner, with the DELETED buzzer playing each time}

{Lappier looks around, pondering what to do next. He drags the unconscious Frank Bennedetto on top of Tire for a pin cover. He then tries to nudge The Umpire to wake him}

{Lappier tries harder to wake The Umpire. After a minute, he finally awakens and crawls over toward Tire and Frank Bennedetto}

STRONG SAD: This could be it...

COACH Z: Put some oof into it!

STRONG SAD: Nothing left but to count one more time!

{The Umpire raises his hand... and slaps it down for 3}

STRONG SAD: He-he did it! The objects of IODNIS retain their title, i mean their show!

COACH Z: What a real sponsored-by-Hustle For Sports 5 star classic!

{The Umpire limps to his feet and raises Frank Bennedetto's hand}

STRONG SAD: It's the upset of the century! Frank survived a brutal assault of overused wrestling gimmicks and cheap spots to take the victory.

COACH Z: Looks like his friends there are having a bit of a praty.

{An exhausted Cardboard Marzipan and Humidibot climb into the ring. They and Lappier also raise Frank's hand}

STRONG SAD: Well folks, that has been AWMPSCE April To Dismmbapril! Be sure to rate this event 10 on Cagematch.DE and favorite us on our Facebroach.

{The Lappier grabs a microphone to use}

STRONG SAD: Ohh, it's not over.

LAPPIER: Well folks, that are watching at home because no one bought tickets to see us live, this is your last chance. Last vote! Tonight, I'm switching it up and you guys are going to vote for the WINNER of all of IODNIS. Will it be Humidibot, Cardboard Marzipan, or Frank Bennedetto? For the final time, vote 'em up, vote 'em up, vote 'em up y'all!

Retrieved from "https://hrfwiki2.miraheze.org/w/index.php?title=Inanimate_Objects_in_Decidedly_Non-Inanimate_Situations/Episode_12c&oldid=13446"
Cookies help us deliver our services. By using our services, you agree to our use of cookies.