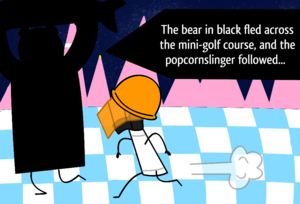 FRANK BENNEDETTO: You say that, but you must know that only one of you can be the winner when it comes down to it.

CARDBOARD MARZIPAN: He's right. It wouldn't be fun to see you or Scotty eliminated, but I gotta play to win.

DRIVE-THRU WHALE: All orders must be in grindcore scream form.

HUMIDIBOT: What do you think, Scot?

HUMIDIBOT: That's kinda what I expected you to say.

{He wheels next to Scotty for a no-armed hug}

HUMIDIBOT: Even if we lose, we'll be best friends, cuz I'm Humidibot.

CARDBOARD MARZIPAN: No offense, but you're such a wet cheeseball!

{The Lappier skateboards in, displaying sunglasses on his monitor face}

{Some benches pop up under the contestants}

STRONG BAD: {singing} The teams are gone
So girl, let's go out to my neighbor's lawn
and set fire to some stuff
I'll bring Solo cups
I'm tired of this song so come on and vote 'em up

LAPPIER: Today we got FOUR votes instead of three.

CARDBOARD MARZIPAN: We've made it big! I'd like to thank the Academy!

LAPPIER: Let me show you the next cake.

{He wheels out a table with a covered cake. He whips the cover off and it is a Tire-shaped cake}

LAPPIER: Well, it is real cake. So let's continue. First one safe is Frank Bennedetto, as usual.

{He tosses Frank a slice of cake}

FRANK BENNEDETTO: On behalf of the Homestarmy, I graciously accept.

LAPPIER: Let's see... Cardboard Marzipan, despite your controversial affair making the covers of all the tabloids, you received zero votes.

{The thrown cake splats against her cardboard}

CARDBOARD MARZIPAN: Yay! I suffered no consequences and learned nothing!

{Humidibot looks at Scotty and then back}

HUMIDIBOT: HEY! OH NO! It's just me and Scotty left!

LAPPIER: I gotta be straight with you, Scotty. You survived WAY too many eliminations, especially the three-way ties. Your stand-around-and-suck-out-loud act was amusing at first, but you have absolutely zero-point-zero main-character potential.

LAPPIER: Scotty... you do NOT win by doing absolutely nothing.

{A piece of cake is thrown into Humidibot's mouth. The vacuum tube lowers and sucks Scotty in}

CARDBOARD MARZIPAN: Is this a crossover episode?

LAPPIER: Grab your putters. The game is on.

{The scene cuts to Humidibot at the Wormhole. The 'bot holds his putter at the ready}

{He putts the ball, which passes through the Sherlock tunnel and approaches the hole. A black arm comes out of the hole and spray paints the ball red, which also slows it to a stop}

HUMIDIBOT: The Worm sure looks different today, doesn't he!

{The real Worm pops next to the unknown arm}

THE WORM: {speaking words that appear above him} INTRUDER ALERT

{The Worm bites the arm and a muffled scream is heard}

HUMIDIBOT: Your twin brother is very handsome, The Worm!

DRIVE-THRU WHALE 2: Would you like a crusty bucket of rust?

DRIVE-THRU WHALE 1: That will be one brigand, drawn and quartered, ma'am.

DRIVE-THRU WHALE 2: Extra ketchup is worth two in the bush.

DRIVE-THRU WHALE 1: Would you like your suffering to go?

CARDBOARD MARZIPAN: Is one of you gonna putt already?!

{He putts, and the ball was caught against the moving ground. However, a figure hiding behind Eh! Steve wields a vacuum and keeps the ball moving using the suction. The ball just barely makes it into Eh! Steve's mouth}

FRANK BENNEDETTO: {does a double take} Wait! That was a dead ball, there's no way!

{He hurries behind the Eh! Steve, but whoever it was had got away}

{He rushes to the next hole}

WHEELCHAIR: {peeking in} Eh! Steve, this blatant rapscallionery had better not be related to youuuuuu!

{Next, Cardboard Marzipan steps up to the infamous statue hole}

CARDBOARD MARZIPAN: Easy hole in one.

{She makes the putt. Once again an unseen figure interferes, batting Marzipan's ball off course with a familiar cardboard shark}

CARDBOARD MARZIPAN: This is too much action! I'm ducking out!

FRANK BENNEDETTO: {running past her} Oo-rah!

{He dives towards the figure behind the Wheelchair statue, who runs for his life}

FRANK BENNEDETTO: Unit is in pursuit!

{Frank chases the figure all over the mini-golf course, pushing his way past Humidibot and the Drive-Thru Whale in the process}

HUMIDIBOT: Be careful! Running is dangerous!

DRIVE-THRU WHALE: Blubb-O's is not responsible for the apocalypse.

{The figure eventually jumps into the blue family recreation water}

{Frank dives down into the pool and swims after the figure. Just when it seemed like they would escape, Frank catches up and does a CQC takedown on the enemy... Bear Holding a Shark}

FRANK BENNEDETTO: Stand down. You are now a prisoner of war of the Homestarmy.

FRANK BENNEDETTO: ...What are you implying?

{The Lappier hops into the frame, followed by the other contestants}

LAPPIER: Well, this is a rotten stinking kettle of fish. The competition has been utterly derailed.

LAPPIER: I'm afraid I'll have to declare a no contest.

LAPPIER: Everybody is up for elimination. Frank Bennedetto, Drive-Thru Whale, Humidibot and Cardboard Marzipan. Your vote counts now more than ever!

SENOR CARDGAGE: Mind the broken grass, Barbara Nice. The gleaming lady will crumb by in a scant.

{Scotty floats into the building, only to run into Frishy Freshy Dragon Man}

FRISHY FRESHY DRAGON MAN: I'm gonna... be over there. Peeow!

Retrieved from "https://hrfwiki2.miraheze.org/w/index.php?title=Inanimate_Objects_in_Decidedly_Non-Inanimate_Situations/Episode_11&oldid=13067"
Cookies help us deliver our services. By using our services, you agree to our use of cookies.