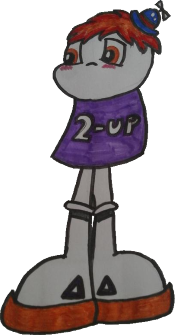 2-Up is the 20X6 version of Honstlar. He looks nearly identical to 1-Up, except he has orange hair (looking similar to Stinkoman's blue hair), orange eyes, pink blushing cheeks, a purple shirt that reads "2-UP" in white, and robot boots with orange soles and a black triangle instead of a red circle. He speaks in mildly poor English, likely due to translation from Japanese.

2-Up is the Superior Challenger of the The Comradical Army of Distinct Takuhatsugasa. He has a time machine (a Videlectrix Swap inside a holographic food replicator with chopsticks), which is located in his Capsulemobile. The Capsulemobile is Pan Pan's former spaceship, and the 20X6 Pillmobile. It is edible, because capsules are supposed to refuel your health. He also has spare Capsulemobiles in case the current one gets eaten completely, as Gfdgsgxgzgdrc does in Interuniversal Expedition.

2-Up was born on July 29th, 20W0. He lives in a giant Spiced Bun. He is the half-brother of Game Over, and the cousin of The Challenger. He likes to tag along with Stinkoman on his challenges. 2-Up's job is to review virtual challenges on the HyperWeb. He occasionally comes to the present-day using his time machine to have lunch with Honstlar.

Retrieved from "https://hrfwiki2.miraheze.org/w/index.php?title=Honstlar/2-Up&oldid=1291"
Cookies help us deliver our services. By using our services, you agree to our use of cookies.