Homestar Runner Mysteries is a compilation of speculative essays consisting of critical analysis on various questions that a viewer may ask about the Homestar Runner universe, its internal logic and its lore. A lot of this is speculation and fan theories and are not being pushed forth as definitive answers, however each fan theory is backed up with some manner of relevant evidence.

Take everything with a grain of salt considering that the Homestar Runner line of work is inconsistent with its own internal logic quite a fair bit. Sometimes purposefully poking holes in its own rules or jokingly addressing aforementioned inconsistencies as part of their humor. That being said, feel free to add any questions that you feel should be addressed in the discussion tab and perhaps a fan theory of your own. Provided it is persuasive or interesting enough to discuss, it’ll be added to the main page with full credit to the theorist.

What does Strong Bad look like under his mask?

What does Strong Bad look like under his mask? It is a question so tempting that it was even the basis of the very first Strong Bad Email. However, in that email, Strong Bad explicitly states aloud that what appears to be a mask is in-fact just his face. So, mystery solved, right? Not entirely. In the Strong Bad Email, the chair, Strong Bad can be shown taking off his mask, out of view from the camera, as he is concealed by his new email-checking chair. He then unpromptly displays “a picture of his parents”. Granted, this feat seems to cause him immense physical pain, it is clear from this evidence that the mask is at least removable.

Now, why can’t it just be his face? So many of the Homestar Runner characters have unorthodox character designs, so why should we apply real world logic to Strong Bad’s design at all? Our world and their world are blatantly incompatible and run on different laws. Granted, trying to prove that Strong Bad’s mask is, in fact, a mask... is a fool’s errand. But, there is one part of his design that intrigues me. His exposed chest. (Um, probably could have worded that better.)

His skin is white which implies that he is a Caucasian male, clearly of graduating age, just like the Homestar Runner. Who else has an exposed Caucasian-skin tone? That’s right. Strong Bad’s very own brother, Strong Mad. This leads me to believe that without the mask, boxing gloves and shoes, Strong Bad likely has a Strong Mad-like face, hands and feet. As opposed to the grotesque flesh abomination Strong Bad face with exposed green veins around his eyes sockets that can be found on Google Images under a casual search for “Strong Bad unmasked”.

What about Strong Sad? There are both supporting evidence and evidence that counters my point when considering Strong Sad. Starting with the obvious objection, Strong Sad is a humanoid-elephant creature as opposed to the body-types that I’ve described for Strong Mad and Strong Bad. Here’s my counter-counter-point. Strong Bad’s father, whoever he is, may very well have been married twice. It’s implied that Strong Mad and Strong Bad are Strong Sad’s older brothers, so Strong Sad was likely born into Strong Dad’s second marriage, if we were to go down this train of thought. Different mother, different genes. However, one attribute I believe the whole Strong family shares. Strong Bad, Strong Sad, Strong Mad and Strong Dad... are the beady-black eyes. Yes, while Strong Bad may be human in his design underneath the mask, he likely has the same eyes as his brothers and the green hue is just part of the mask itself.

So then, if Strong Bad does in-fact wear a mask and boxing gloves and he wasn’t just born with them, then why does he insist on wearing it all of the time, even in the shower? Well, let me answer your question with a question. What is a mask? It is something one wears to conceal their identity or put on a performance of some kind, perhaps play a character? It is no secret that Strong Bad has a huge ego, but also a fragile one at that. He wants to consider himself attractive with the ladies, but on average, women tend to prefer men that are taller than them in the relationship. Generally speaking, I mean. I’m not tryin’ to imply nuthin’. There’s been studies. Anyway, Strong Bad likely adopted the mask as a way of creating a character that matches his ego. A coping mechanism to help deal with his personal insecurities and a way to be confident in front of other people, but especially, the smokin’ hot ladies that he mentions constantly.

Now surely, people will bring up the “Pup Named Scooby-Doo” argument. Yes, the fact is... we’ve seen the Strong Brothers as children... and in every video, photo or flashback, Strong Bad is seen wearing the mask. So, this pretty much shatters my theory, right? Well, perhaps. But, perhaps not. While there is a lot that works both for and against this theory, it cannot be denied that Strong Bad’s “mask” behaves like a mask. He is able to physically take it off. When the strings are pulled, the mask tightens.

Now what you’ve all been waiting for. Here is my “artist’s rendition” of what Strong Bad looks like without his mask on. 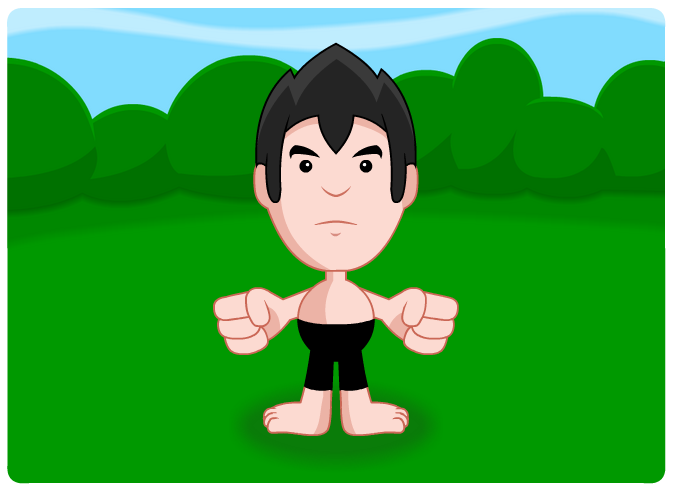 Truly terrifying stuff. But, even with all this speculation, it may very well be possible that no part of this theory is true, but there is definitely some oddities surrounding Strong Bad’s mask and that is why it is the premise behind the first Homestar Runner Mysteries article. Hope you enjoyed reading this as much as I enjoyed writing it.

How is Homestar Runner able to pick up things with no hands?

So, what is with this no-armed whitey? Are his arms just invisible? Well, no. The reason they can’t “just be invisible” is that you’d see holes or tears within the Homestar Runner’s shirt if there was something emitting from his torso that we just couldn’t see. If there was something physical and tangible, but was invisible, attached to Homestar Runner, it would have a real and present effect on everything around it. So, maybe he has invisible detached hands like Rayman? The truth is... not even the Homestar Runner characters themselves seem to know how they do it, but I’ll tell you who has a theory! Strong Bad.

On October 8, 2018, Strong Bad posted on Twitter, under the username StrongBadActual, a drawing of Homestar demonstrating advanced telekinetic abilities, with the remark that "If Homestar's possibly latent telekinetic abilities ever fully manifest... we're all hosed." He added, "Um, guys got no arms. Still can eat spaghetti. Telekinetic. See'msayin?" but also said, "I'm not makin any proclamations here. That's why I said 'possibly latent.' I dunno how he does it."

Of course. The answer was right under our noses the entire time. Telekinesis. Telekinesis, of course, being the ability to move objects at a distance through use of mental powers or other non-physical means. Imagine just being able to THINK at something and just having it move for you. But, that leaves another question. If Homestar and the other no-armed citizens of Free Country, USA are telekinetic, how come they don’t know about it? Or rather, how come they never say it by name? It’s possible that it’s just never occured to them, but it seems strange that these mind powers that everyone seems to have just go unmentioned in casual conversation and whenever they are mentioned, the characters treat it like a joke. It doesn’t make sense to us as an audience member, but it should make sense to the characters in-universe. Then again, I’m not sure if I’ve ever seen Homestar question his own telekinesis on-screen before, so this point may be void.

Either way, how strong are the telekinetic abilities of these characters? Can they move things from extremely far away? Did Strong Bad only get the grabbo-arm because he felt lacking in that department? All this and more on the next episode of Homestar Runner Mysteries.

Does Stinkoman take place in the same timeline as the main show?

Does Stinkoman take place in the same timeline as the main show? Why is this even a question? It seems firmly established in the Strong Bad Email, time capsule, that Homestar Runner is able to put a gross-old wig in a “time box” and have it be retrieved by 1-Up in the far-future year of 20X6 (which reasonably has to be sometime between 2010 - 2099). If linnear time works in the way that we know it does, this is pretty much a slam-dunk case that Stinkoman and 1-Up exist in the far-future of Homestar Runner.

But, hold on just a minute. What are the chances that Strong Bad is able to invent a Japanese cartoon version of itself and in the far-future, long after he is dead, the exact things that he describes happening in the Japanese cartoon are happening in his universe. Does he just have the ability to manifest things through sheer power of imagination? That means either Strong Bad is a God or could KILL GOD and I DON’T CARE IF THERE IS A DIFFERENCE! Stranger things have happened. Trogdor seems to be real now, all of the sudden! So, maybe Strong Bad can just will things into existence? But, that’s a whole other Homestar Runner Mystery. I digress.

In the Strong Bad Email, alternate universe, Strong Bad meets Stinkoman in what can only be assumed is an alternate universe... where Strong Bad’s very own vector self from a video game HE CREATED... again, through SHEER IMAGINATION and CUTAWAY... appear as Stinkoman’s training simulator. It may very well be possible then that Stinkoman 20X6, like Trogdor, Sweet Cuppin’ Cakes and Teen Girl Squad, are all in Strong Bad’s head. The true far-future of the Homestar Runner universe is not recorded because Stinkoman 20X6... is an anime in present-day. Another DVD set sitting on Strong Bad’s dusty old shelf.

So, what about the time box that 1-Up found? Well, that could very well of also happened in Strong Bad’s head. It is how he imagined a scenario where the time capsule was dug up would turn out, re-using characters from some of his previous fantasy sequences. So, is Stinkoman’s life an alternate universe, a far-off future or Strong Bad’s imagination? Like with all things Homestar Runner, there is no definitive answer to this one. But, although it seems the least satisfying, I’m going to conclude that Stinkoman 20X6 takes place in Strong Bad’s imagination. As the writer of Stinkoman Email, I’m sure I can make this work somehow.

Feel free to post in the discussions tab of this page, anymore mysteries you’d like me to cover. This has been Kidstar, signing off.

Retrieved from "https://hrfwiki2.miraheze.org/w/index.php?title=Homestar_Runner_Mysteries&oldid=12691"
Category:
Cookies help us deliver our services. By using our services, you agree to our use of cookies.