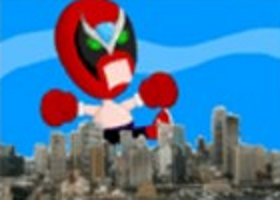 In this PAY PLUS!-exclusive email, Strong Bad considers what he would do if he "hed" magic powers.

STRONG BAD: {singing} Email is what happens when you don't brush your teeth.

Dear sb
if you hed magic powers, what would you use them for?

Form some guy named bob
in some place named earth

STRONG BAD: {typing} "Head magic powers"? What kinda powers would that be exactly? You mean like, switching peoples' heads? Removing heads? Just anything related to heads? Huh. That doesn't sound half bad now that I think about it. {clears the screen} As for your question... I'd probably use my head magic powers on Strong Sad. That guy's head is way too dumpy to stay on his dumpier body.

{Cut to the Smoky Office. Classical music plays. Strong Bad sits on Le Restige with the Lappy 486. The Cheat walks up and serves him Strong Sad's head on a platter.}

STRONG BAD: Ah, thank you for your service, Mr. The Cheat. And may I have a side of Bubs with that?

{The Cheat pulls Bubs's head on a platter from hammerspace}

THE CHEAT: {triumphant The Cheat noises}

THE CHEAT: {impatient The Cheat noises}

THE CHEAT: {panicked The Cheat noises}

STRONG BAD: What's wrong, man? You love dollar bills! And now you... have one attached to your neck! It's what any sane person would wish for!

{Cut to Strong Bad at the Lappy}

{Cut to The Field, where Senor Cardgage is showing a pie chart to Homestar, dressed in his sleepwear and holding a mug of coffee}

HOMESTAR RUNNER: {sleepily} So explain this chart to me again.

{Strong Bad peeks in from the left side, and Homestar's head poofs into a pie}

HOMESTAR RUNNER: {running off} Sugarface has returned once again!

STRONG BAD: {typing} Anyway, let's see... who else could I use my head magic on? Hey, Bubs's head is pretty boring. I'd like to use them on him.

{Cut to Bubs' Concession Stand, without Bubs. Strong Bad walks up to it.}

STRONG BAD: Hey, Bubs... Bubs? Aw paunchsicles, there's no one here. What am I supposed to do with these head magics?

{The concession stand poofs into Bubs's head. The text on the stand has been replaced with Bubs-like eyes, and teeth resembling Bubs' teeth hang above the stand's window.}

STRONG BAD: WAH! That's not what I meant to do! {runs away}

{Cut to a wide shot. The Cheat is standing next to the stool.}

STRONG BAD: I could bring back all my favorite technologies...

STRONG BAD: Get rid of that squeaky ol' The Cheat... maybe replace him with one of those Sterrances everyone's been talking about lately...

{The Cheat squeals as he turns into Sterrance; Strong Bad turns toward him and stops typing}

STRONG BAD: Y'know what? Maybe I'd use my head magic on him too. His mask just makes him look... too menacing.

{The mask poofs off Sterrance's face}

STRONG BAD: Aww. That's just perfect. {turns back to the Tandy; cut to a close-up as he starts typing} Hmm. What else? I could grow 500 feet tall and destroy Tokyo, like in the movies!

{Cut to Strong Bad in the middle of a city}

{Cut to a wide shot of the buildings in live action. Strong Bad grows taller than them, and starts stomping around}

STRONG BAD: {typing} Oh yeah, that would be fun. I'd also definitely use my magic for more mundane things, like gettin' the Homestarmy outta my basement. They've been camping out for weeks and refuse to leave.

{Cut to a close-up of Colonel Homestar in the basement}

{Cut to Strong Mad on the couch next to Frank Bennedetto}

STRONG MAD: I'M RIGHT NEXT TO YOU!!

{Zoom out, revealing Homestar and Strong Mad are several feet away from each other}

HOMESTAR RUNNER: Oh, wise guy, eh? The general will not be pleased with your backsassitude!

STRONG BAD: {typing} Unfortunately, I don't have magic, so I'll have to consider other means.

{Cut back to the basement. Strong Bad walks in.}

STRONG BAD: Hey, Homestar! I've got something to show you!

HOMESTAR RUNNER: You got it! {steps on trapdoor}

{The Cheat presses the button on the remote. The trapdoor opens under Homestar's feet. He falls about two feet and stops.}

HOMESTAR RUNNER: Woo! That was fun!

STRONG BAD: The Cheat, I thought we were opting for the bottomless pit.

{Homestar starts a little dance with his feet}

STRONG BAD: Not a two-foot pit!

THE CHEAT: {angry The Cheat noises}

{Cut to the basement, where Strong Mad sits on the couch with Homestar's feet dancing on top of him}

STRONG MAD: I HAVE A FUNNY HAT!

{The Paper comes down}

{Cut to everyone standing in The Field at night, similar to the ending of Halloween toons. From top to bottom, left to right: The Cheat with a dollar bill for a head, a platter with Strong Sad's and Bubs's heads on it, Homestar Runner with a pie for a head, Bubs' Concession Stand with Bubs's face, and Sterrance without his mask.}
HOMESTAR RUNNER: Hey, The Cheat. I really like your Garfield costume.

Retrieved from "https://hrfwiki2.miraheze.org/w/index.php?title=Gfd%27s_Random_Stuff/sbemail230%2B&oldid=11936"
Cookies help us deliver our services. By using our services, you agree to our use of cookies.