Champeen News Show is a program that airs throughout Free Country, USA. It is hosted by Champeen and discusses various events that occur in the Homestar Runner universe.

The show primarily discusses events that occur in other toons, offering alternate perspectives on them. It also contains original stories. The original stories tend to feature characters that--like Champeen-- can be considered scrapped or rejected.

The show is usually set in a typical news broadcast set, although Champeen will sometimes film on other locations. It will also sometimes feature scenes that would not be shown on tv, such as behind the scenes footage or Champeen's efforts in investigative journalism. 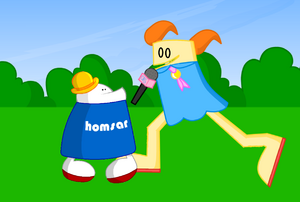 The people want to know... why did you do it?

Champeen uncovers a big secret that Bubs has been hiding from the rest of the town. Will she be able to break the news?

The Cheat starts working for Champeen after she interviews him for her show. Strong Bad tries to win back his lackey.

Champeen tries out the seat of a sports announcer when Homeschool Winner challenges Homestar to a fight.

Retrieved from "https://hrfwiki2.miraheze.org/w/index.php?title=Champeen_News_Show&oldid=13166"
Category:
Cookies help us deliver our services. By using our services, you agree to our use of cookies.