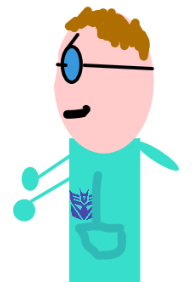 "DANGIT, IRL VERSION OF MY OWN NEMESIS, YOU'LL RUE THIS DAY!"

While his real name is Carcer, AntiCharlie, as he prefers to be called, is the rival of Charlie. The Eduardo to Charlie's Edd, if you will. Originally an evil version of Charlie from an inverted version of Free Country, he took inspiration from another criminal named Charlie, who is unconnected to Free Country. His original intention was to hunt down his heroic counterpart, and thanks to some special hacking skills, was quite powerful, being able to invade other's dreams and thoughts. Before coming to the actual Free Country, AntiCharlie tried hunting serpents as a hobby, inspired by the criminal Charlie he was taking after. Ever since coming to the actual Free Country, AntiCharlie has invaded one of Strong Bad's dreams, to hunt down his heroic doppelganger, and has also infected Free Country, USA with a glitchy virus, similar but overall much more dangerous than the one from email 118. AntiCharlie has even implied that he was the one who sent the original virus email. In an inversion of Charlie and Marzipan being enemies, AntiCharlie and the cousin of Marzipan, named Debra, are actually in love with each other, and are actually married. AntiCharlie was once defeated by Phantom, and was imprisoned somewhere, but has broken free. He does have a good side, however. During one Halloween night, Debra got sick of AntiCharlie's evil plans, and temporarily broke up with him. After learning that trying to kill his counterpart is just crazy, AntiCharlie swore not to be as villainous as he once was, and it shows. He's helped Strong Bad and his heroic counterpart defeat Phantom when she tried to beat up Strong Bad, and has managed to travel to the year 20X6, to save Strong Bad, Stinkoman, Marzipan and Bubs from Alterheart, the 20X6 version of Phantom, who temporarily killed Charlie. Just like his heroic counterpart, AntiCharlie has two companions, named Digby and Jackson. Digby is a neutral yet innocent character, but Jackson is an evil mastermind, and is more of a villain than AntiCharlie could ever wish to be. Just like Charlie, AntiCharlie also enjoys Cola. However, he prefers Diet Cola, without any caffeine in it. AntiCharlie is also quite protective of his wife Debra, and if anything bad happens to her, AntiCharlie will take action, sometimes violently.

{The jail that AntiCharlie was once in has a huge hole in the side of it.}

{Evil laughing is heard, as AntiCharlie walks up.}

ANTICHARLIE: Why, hello there, viewers. I'm sure you already know regular Charlie. That worthless loser who hangs out with Strong Bad? Well, I'm his polar opposite. I...am AntiCharlie... I've travelled to many universes, and have worked for many villains, but I've made my home in the mirror universe version of Free Country. One where the characters are inverted, and Marzipan's cousin, Debra resides. Debra and I fell in love when I first arrived, but for some reason, our heroic counterparts seem to hate each other... That's another thing. Heroic Charlie is such an embarrassment. If you hang out with him, you'll see what I mean. I also hate Phantom, the one who locked me up. Thankfully, I've managed to break out, thanks to my two companions, whose names I shall not reveal for now, but you might meet them one day...

{AntiCharlie is standing near the Stick.}

DIGBY: The camera's on!

ANTICHARLIE: I KNOW THAT, YOU IDIOT! Jeez...anyway...I'm AntiCharlie, or at least, that's what I prefer to be called. I come from an inverted version of Free Country, along with my wife Debra. While I was originally a villain, Debra managed to help me become neutral. While I no longer want to hunt down my heroic counterpart, I still want to show that I am superior to him. After all, I'm Numero Uno!

{He smirks. The video ends.}

Retrieved from "https://hrfwiki2.miraheze.org/w/index.php?title=AntiCharlie_(OC)&oldid=13463"
Category:
Cookies help us deliver our services. By using our services, you agree to our use of cookies.