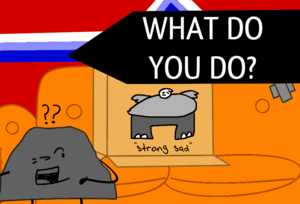 Description: The eliminated contestants get their time to shine.

{In The Field, the remaining contestants are gathered around, with Humidibot, Scotty Titi, and Cardboard Marzipan sitting on benches}

CARDBOARD MARZIPAN: Me too!

F-SACK: That does mean one of you will leave the show, though. Your trio is about to be broke up.

CARDBOARD MARZIPAN: That just means I have new friends to make then.

HUMIDIBOT: Whatever happens, we'll get through it.

FRANK BENNEDETTO: How noble of you.

(The Lappier suddenly drops down from the sky}

LAPPIER: Now Bubses, you made a perfectly mediocre tribute to Trogdor last time. So one of you is sayin' bye bye.

HUMIDIBOT: If it's Scotty, I can say bye bye for him.

{In walks The Cheat covered in whatsit}

THE CHEAT: {embarrassed The Cheat noises}

HUMIDIBOT: And me! Scotty will pass too!

LAPPIER: As expected. Cardboard Marzipan, you have never been voted since you were added as a recommended character.

CARDBOARD MARZIPAN: That's cuz I am lovable and kind!

LAPPIER: And once again, you get zero votes.

{He pretends to toss a cake to Cardboard Marzipan}

LAPPIER: Now, these two are interesting. Humidibot, you've been voted every single time you were up for elimination. But you've also survived every time.

LAPPIER: And Scotty, you escape elimination despite doing nothing and saying nothing in every episode.

LAPPIER: Well, one of your lucky streaks comes to an end. Humidibot?

LAPPIER: Say bye bye... to yourself!

{The vaccuum tube lowers, lowers... but then stops}

LAPPIER: Humidibot, you have a second chance at winning this competition. Because today is REJOIN DAY!

LAPPIER: One eliminated contestant is going to rejoin the game.

LAPPIER: Now now, it's up for the voters to decide.

FRANK BENNEDETTO: But then there's no point in them having a competition.

LAPPIER: Sure there is. I will subject the applicants to the same rigorous screening process that Strong Bad subjected a bunch of applicants to in the sbemail "replacement". Then the viewers choose who was most impressive!

{Everybody stands at a safe distance. The vaccuum tube rapidly spits out Tony Stony, Trivia Time, Onion Bubs, The Paper, and Doreauxgard in a big dogpile}

{Cut to Humidibot and the Lappier alone in The Field}

LAPPIER: I'm gonna hold up a last name, and you make fun of it.

LAPPIER: {exasperated} Just... try and play along with the game.

HUMIDIBOT: Grammar... as in get some?

HUMIDIBOT: Ahh, this is too hard!!

{The Lappier presses a button on his keyboard and he displays the DELETED screen:}

THAT WAS UNNECESSARILY CUTE! BUT SURE, DELETED!

{Cut to the basement with the Lappier and Tony Stony. A cardboard box with Strong Sad painted on it is on the couch}

LAPPIER: Strong Sad's on the couch, watching TV. What do you do?

LAPPIER: Some boring documentary that contains no lasers or hot babes in the slightest.

LAPPIER: Uh, if he's busy, then what do you do?

LAPPIER: We got a real diamond-cutter personality right here, folks.

{Cut to Onion Bubs and the Lappier near Bubs' Concession Stand}

{He begins to be drowned out by the screaming fans cheering for Onion Bubs, including the one guy screaming "ONION BUBS!!"}

LAPPIER: {covering his ears} Ugh, it's like Beatlemania in here. Did you have to bring your entourage?!

LAPPIER: And a few guys, I hear.

LAPPIER: Strong Sad's on the couch. Whatcha gonna do?

{Trivia Time barks and opens his top, ejecting a cookie against the cardboard box}

{Cut to The Field with the Lappier, Doreauxgard and Scotty Titi who is wearing a cardboard box with The Cheat painted on it}

LAPPIER: Pretend this is The Cheat. Give him a kick!

LAPPIER: Oh. You have a pencil as a bottom half. Well, surprise me.

LAPPIER: The Cheat is not a pencil drawing.

DOREAUXGARD: Gimme a few days or weeks and I could rub him out!

LAPPIER: Well, folks, you know what we gotta do now. The most efficient way to humiliate the uncoordinated and overweight - DANCE CONTEST!!

{Cut to a stage. Doreauxgard spins around and bouncing on his pencil.}

{Next is Onion Bubs, who tumbles around like he was just rolled across a table}

{Then Tony Stony, who does the slightest little dance with his arms}

{Humidibot wheels himself around and flaps his lid mouth}

{Trivia Time just bounces around and barks like a dog}

{The Paper prints out as he always does}

THE PAPER: > I'm kinda permanently attached to the top of the screen, yo!!

{The Paper tries to crinkle himself back and forth. But he doesn't move much at all}

THE PAPER: > I can dance the electric slide... I just don't want to.

{A screen comes up displaying the rejoining contestants}

LAPPIER: {voiceover} Well, there you have it. Vote for who you want to get a second chance at winning the IODNIS grand prize. Tony Stony, Trivia Time, Onion Bubs, The Paper, Doreauxgard, or Humidibot. Peace!

Retrieved from "https://hrfwiki2.miraheze.org/w/index.php?title=Inanimate_Objects_in_Decidedly_Non-Inanimate_Situations/Episode_8&oldid=12211"
Cookies help us deliver our services. By using our services, you agree to our use of cookies.